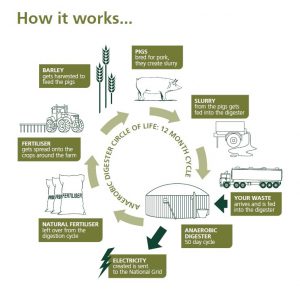 The pig slurry and feedstocks are fed into a digester (which is a 2500m3 tank) where under anaerobic conditions i.e. in the absence of oxygen, bacteria will breakdown the material and produce a methane rich gas. The quantities of each feedstock used are determined by the methane richness of the biogas produced. The temperature of the digester is maintained between 38oC and 40oC which is the optimum temperature for the bacteria to live and reproduce therefore it is the optimum temperature for the production of methane rich biogas.

The gases produced by the bacteria rise up through the slurry. When the gas reaches the top it is caught in the roof space which has a PVC membrane to trap the gas. The gas is drawn off by the generator engines to produce electricity.

About 15 percent of this electricity is used to run the facility and the remainder is exported to the national grid. As well as electricity the engines also produce hot water. The heat is captured and used to heat the digester to the desired temperature. The heat is also neutralised for the pasturising process. Thus, no fossil fuels are used in the process giving a totally renewable energy. The system was supplied by Weltec Biopower Germany. There have always been very good and environmental reasons for using AD Technology because of its well recognised potential to confer multiple benefits:

Not sure if your waste could be turned into a resource?

We’ll analyse your waste and give you a free rapid assessment to see if you can start saving money with BioGask. Give us a call!